Why Are All Skaters Skinny 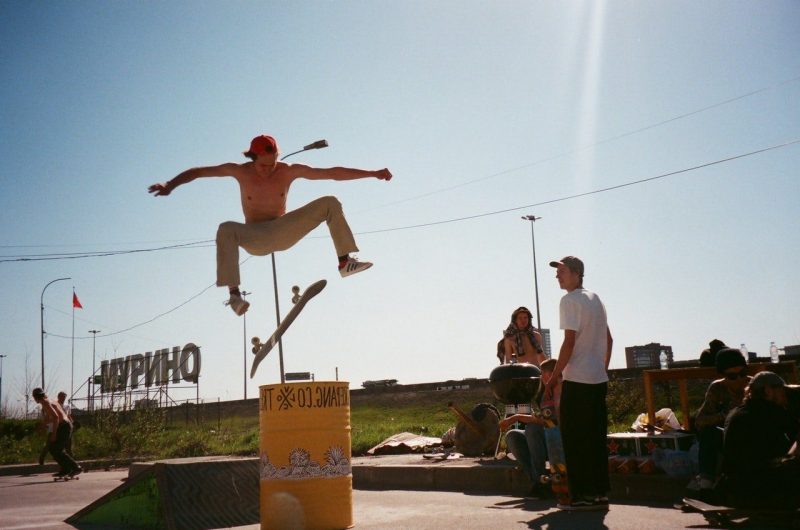 Every sport brings its own unique type of physique. In fact, it can also be a particular discipline and even a weight category within the same discipline that comes with its physique. And, whether we like to admit that or not, looks play a very important role in what kind of sport or an activity we’ll choose for us. And while we’re at it, the topic that we’re interested in here is skateboarding and how it impacts one’s physique. In particular, we’re answering the question that many skateboarding fans and enthusiasts might ask – why are all skaters skinny?

Skaters are skinny because being skinnier presents a significant advantage in this sport. Such a physique allows for more agility, flexibility, and mobility. And, of course, it’s much more efficient as you would spend a lot more energy on even the simplest movements if you had a lot more mass, be it muscles or fat.

And, additionally, skaters are skinny because skateboarding is an activity that can generally be defined as more or less intense cardio, sometimes even similar to HIIT regimens. This particular aspect of the sport can make a strong impact on one’s figure.

But, as with all things related to sports or any kind of physical activity, things aren’t that simple. So let’s dig into this topic and see why skaters tend to be skinny.

Actually, Not All Skaters are Skinny

But before we do that, you’ll have to know that not all skaters are actually skinny. Sure, almost all of those who do it actively and are dedicated to the craft of skateboarding are skinnier or leaner. However, if we’re talking about casual skateboarders, those who are doing it occasionally as a hobby, you’ll find individuals with plenty of different physiques.

But nonetheless, the same old rule applies, and that is the fact that being leaner will make things much easier. It’s just that not everyone has to have the same build if they want to do it casually. After all, we even have more or less serious active athletes who use skateboarding as a side activity, usually for fun, but it can serve as a nice addition to the weekly exercise regimen, or just as an active way to spend your leisure time.

How Are Skateboarders Built?

As you may already have seen, skateboarders are usually pretty lean. If we were to look at those pro-level skaters, we wouldn’t exactly describe their physique as “skinny,” but rather athletic and lean. “Skinny” would be more in the vein of marathon runners and professional skateboarders kind of remind us of rock climbers’ bodies.

In a lot of cases, skateboarders are usually not that tall. While there aren’t any height limitations, those who are about the average height or slightly below it might have some advantage. After all, there’s a lot of physics involved in skateboarding and you’ll have to keep the balance in check. And the taller the skateboarder is, the more challenging it gets to keep the balance in check while doing all of those complicated tricks.

On the other hand, you don’t have to worry if you’re tall. It’s far from an impossible task to become really good at skateboarding. In fact, Tony Hawk, who’s one of the biggest legends in this sport, is about 6 feet and 3 inches tall. And if he could have no troubles with his height, then that means that the sport has no concrete height limitations. 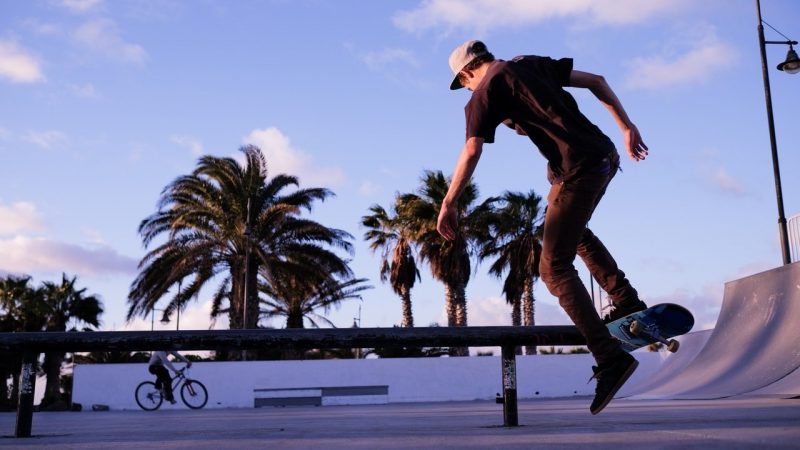 But more importantly, advanced and professional skateboarders have low body fat levels. Having any excessive “dead weight” can only make things more difficult. And this goes for all of the important aspects required for skateboarding, including agility, speed, and endurance.

In some way, you could say that they’re “ripped,” although not “ripped” in the classic bodybuilder sense. Skateboarding itself can serve as a more or less intense type of cardio, which definitely impacts the way how skateboarders look. There are plenty of sudden movements, something that requires one to act as fast as possible with immense precision of every single movement.

In addition to this, skateboarders should also be pretty flexible. In this sense, we can draw parallels with gymnastics or plenty of disciplines within athletics. And all of this results in a pretty lean figure with elongated muscles and a very low percentage of body fat.

Proper Diet Should Be One of the Priorities

Of course, with such a sport also comes a need for a fairly strict diet. Well, if we’re talking about those who are serious about it and who are aiming for that advanced preparedness level and physique. And even if you’re not that serious about skateboarding and just feel like doing it at an intermediate level, adding a proper diet can definitely be of great help.

Generally speaking, if you’re just getting started on it, you could follow some of the basic habits that can help you lose excess fat and build muscles in a way that would work for skateboarding. This includes cutting down on sugars, the “bad” LDL-cholesterol, white bread, white pasta, white rice, and, of course, alcohol. At the same time, make sure to have a good intake of fibers, protein (of all sources), fruits, and, vegetables.

Additionally, it’s also a good idea to take care of the calorie intake. If you’re aiming to lose unnecessary fat for skateboarding, there should be a caloric deficit in the equation. Of course, you shouldn’t starve yourself to the point of feeling awful, but some restrictions should be in place.

Although some may think skateboarding isn’t a serious sport (a misconception due to its somewhat rebellious nature), skateboarders can also have their well-conceived exercise regimens. Sure, skateboarding itself is an activity that counts as an exercise, but just like with every other sport, you need something to complement it with in order to achieve great results.

So while we’re at it, there are a few types of exercises that you should implement in your regimen, aside from practicing skateboarding itself, if you want to get better at it:

When it comes to steady-state cardio, pretty much any standard type will work. Running is probably the most simple solution. However, knowing that skateboarding can cause strain on the joints from all the excessive pressure that you put on it, then maybe you can consider other forms of cardio that could keep you safer from any potential long-term injuries. Swimming, for instance, can be a great alternative. The point here is to keep your cardiovascular system in check.

Then you should also consider doing shorter intervals, like sprints of any king. Again, running can be a great way to do so, but you should always bear in mind that your joints should stay safe. Once or twice a week of interval training should be more than enough.

Doing strength exercises can also be very beneficial and it should be included in your routine at least once per week. Now, you can either do some weightlifting or bodyweight exercises. But whatever it is that you do, your leg strength is above everything else. In addition, you should also focus more on the pulling rather than pushing exercises. But then again, any kind of strength regimen can benefit you as it will not only help you lose calories but will completely change your musculature and help you achieve your goals.

In the end, it’s very important to note that skateboarding requires you to do a lot of stretching. In fact, we’d recommend that you do stretching not only after every workout session but also as standalone training sessions.

Will Skateboarding Help Me Lose Weight?

In short, skateboarding can help you lose weight if exercised properly. As we already said, the activity itself takes effort and can serve as intense cardio. However, don’t get carried away thinking that just skating around a little and taking a lot of long breaks between casual practicing of the tricks that you like is going to get you all looking pretty.

Just like with every other sport, there are plenty of regimens and long-term exercise plans. And if you implement different types of cardio, strength training, as well as proper diets, you’ll have a much easier time losing weight. Skateboarding on its own can definitely help you in this process, but adding different stuff can also be of great help.

With all this said, you should also know that losing weight takes a lot of time. Don’t ever be tricked into thinking that you can lose all of your excess fat in a month, at least without unwanted consequences. Just like the skateboarding skills, losing weight through any sport takes a lot of time and effort. And persistence and continuity are always your main priorities.

← Prev: Why Are Japanese Climbers So Strong Next: Can You Over Scrape a Snowboard →