Is Rock Climbing Better Than Weightlifting? 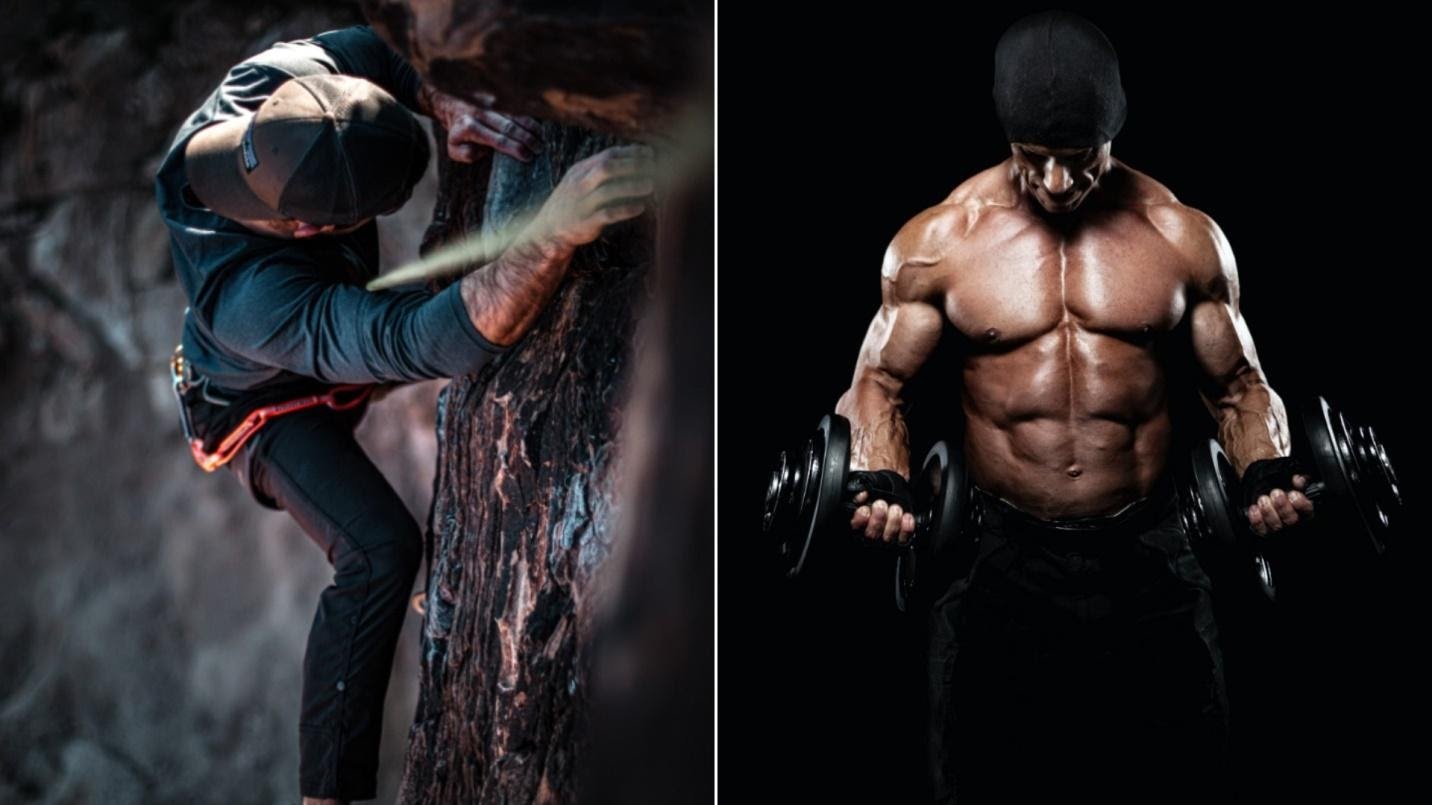 Finding the right exercise regimen is not exactly the simplest task. Even if you know precisely what you want, there’s an abundance of methods to choose from, not to mention plenty of different theories on how you can achieve your set goals.

If we’re talking about strength exercise, the main division is on weightlifting and bodyweight exercises (calisthenics). However, there are plenty of different exercise regimens and routines within these two categories and we’ve seen that both can give great results.

In this particular guide, we will be discussing whether rock climbing is better than weightlifting. But if you’re looking into different exercise methods, you shouldn’t ask yourself what is “better” or “worse” but rather what works better for your goals. If you’re already here, it’s safe to say that you’re looking for the best exercise methods to increase strength and improve physical fitness, rather than actually training to become a professional athlete.

Weightlifting: What You Should Know

Weightlifting is a broad term and includes a few different disciplines. In an everyday sense, weightlifting usually refers to anyone just “going to a gym” or, infamously, the so-called “bro lifting” that’s usually not as effective.

If you want a proper exercise method that will yield good results, here are the main disciplines that you’ll need to know about:

Tracing roots in conventional strength training, powerlifting consists of three main compound lifts – bench press, squat, and deadlift. The main goal is to lift the maximum possible weight for 1 repetition. Those who do powerlifting in one form or another focus on doing sets with fewer repetitions, usually between 2 and 5, with relatively long rest periods between sets. As a result, powerlifting helps bring straight-up brute strength and increased muscle mass.

Powerlifting-oriented training regimens also include isolation exercises, meaning that they focus on specific muscles. However, these are not a priority but rather serve as a method to help increase maximum strength in the three aforementioned lift types.

Powerlifting methods can help you increase muscle mass and maximum strength for your weight category. So if you want to go into super-strength mode, doing 5 sets of 5 repetitions with long rests between sets is the way to go. Make sure to gradually increase the weight with each set and get close to maxing it out in the last set.

The main goal of bodybuilding is purely aesthetic. Competing bodybuilders technically “perform” in front of judges, who then rate each contestant according to their muscle mass, definition, and symmetry.

Additionally, most individual sets include more repetitions, somewhere between 8 and 12, usually performed in “super-sets,” meaning that you immediately go from one exercise to another. Very strict diets and some cardio are also very crucial for successful bodybuilding.

If you want to have that perfect beach body and look “shredded,” bodybuilding regimens can help you in that. Just bear in mind that this has to be accompanied by proper cardio and very strict diets.

While not as popular among the general gym-going population, traditional Olympic lifting can be a great way to increase explosive power. It includes two disciplines, clean and jerk, and snatch. These compound lifts put great emphasis on technique as it is a huge part of being able to lift more. Just like with competitive powerlifting, Olympic weightlifting is done for 1 max repetition.

Although Olympic lifting is rarely performed in conventional gyms, these two exercises can be a great way for an athlete or casual lifter to increase power. So feel free to add clean and jerk, and snatch to your routine, or some different versions of these compound lifts (i.e. power clean or muscle snatch).

These days, we have plenty of combined weightlifting methods, including CrossFit which is even recognized as a sport. While we can categorize all of these as “general fitness,” weightlifting is a great means to increase muscle mass, strength, and even stamina and agility for different sports.

With that said, every sport that requires some weightlifting includes specially devised lifting programs that help athletes achieve maximum results in their respective disciplines. If you’re exercising on your own, you can always combine different methods from powerlifting, Olympic lifting, and bodybuilding. Just make sure that you do enough research and see if it can all work together.

Risks That Come With Weightlifting

Just like every physical activity, weightlifting comes with its risks. It’s not uncommon to see even professional athletes suffer from more or less serious injuries. Therefore, no matter the exercise regimen, doing proper warm-up and stretching is a must.

Additionally, it’s highly advisable that you consult with a professional before doing any type of weightlifting. Injuries can occur not only due to improperly done movements but also with a barbell and weights falling onto your body. If you’re an absolute beginner, be patient and start with lower weights. You should also be extra careful with CrossFit or any other form of combined lifting methods as the risk of injury is significantly higher.

Is Rock Climbing Better Than Weightlifting?

Before we get into it, let’s get one thing straight – rock climbing is not a proper substitute for weightlifting. If your goal is to increase muscle mass and strength, your exercise routine should not be based around rock climbing.

On the other hand, rock climbing comes with its benefits and there are ways how it can improve one’s appearance, physical fitness, as well as mental health. But just like with weightlifting, you first need to know whether climbing is your main goal or just another method to improve your overall physical fitness.

So let’s start with the obvious – climbers look much leaner compared to lifters. The activity itself requires you to be flexible, light, and have enough stamina.

Aside from forearms, climbing engages legs and core muscles. And yes, it increases strength, but not in the same way as lifting. With proper training, you’ll be able to hold on tight to a small piece of rock with only your fingers for a relatively long time. Climbers are capable of staying in some pretty uncomfortable positions for quite a while.

On the other hand, climbing rarely engages triceps and chest muscles. Climbers implement movements that utilize muscles in a somewhat similar manner to “pull” exercises. However, it will mostly help you improve agility, flexibility, and endurance. Not to mention that it’s an intensive sport that burns off a lot of calories. 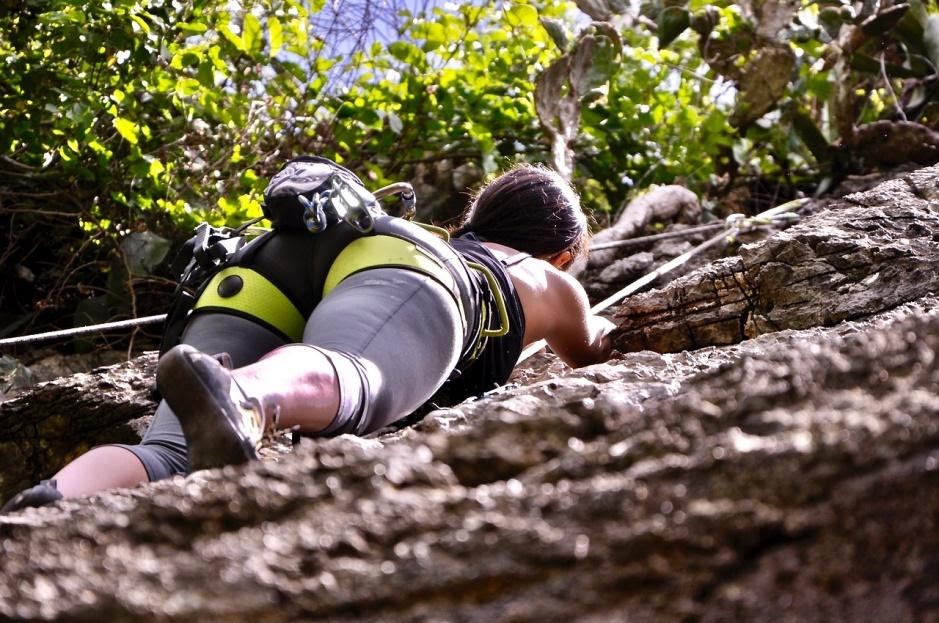 Weightlifting vs. Rock Climbing: What Is the Right Choice for Me?

Although often used as recreational means “to stay in shape,” different forms of weightlifting play a very important role in achieving better results in different disciplines. This also goes for advanced or professional rock climbers.

However, it’s important to build functional strength that will assist you in becoming a better climber. This usually involves lower repetition sets, compound lifts, and not doing reps until failure. Additionally, there are no conventional “splits” as with bodybuilding, but rather total-body exercise routines.

In case you really like rock climbing but also want to build strength, you can always combine it with lifting. But for a fuller and more “balanced” physique, it’s important to add some chest and triceps workouts. However, be careful not to overdo it since having “buffed” chest muscles can reduce your mobility as a rock climber.

Bouldering Can Be a Good Alternative

If you’re aiming for more explosiveness and like doing intensive exercises, bouldering can be a partial (and a pretty modest) alternative to building strength through weightlifting. Bouldering is a form of rock climbing done solo on smaller rocks, usually between 4 and 6 meters in height. In this case, climbers are not secured by a rope and it’s mandatory to have a crash pad to fall on.

This type of climbing is much more intense and gets your heart pumping much quicker, kind of similar to sprinting. Shorter and intensive runs that require fast movements can ultimately give different results compared to regular climbing.

But with all this said, rock climbing cannot ever be a complete substitute for weightlifting. And that’s why it’s important to know what you really want to get out of exercising.

When it comes to your appearance, rock climbing will make you look leaner. Meanwhile, different weightlifting disciplines can help you build much more muscle mass. This is taken to extremes with professional bodybuilders who also focus on definition.

Lifting itself can also be one’s goal. You’ll try to lift bigger weights, which can increase your muscle mass in the process. And it’s not only strength that comes with more muscle mass, but also the ability to spend more calories, ultimately helping you lose excess fat. (And you can also eat more.)

If you’re aiming for an all-around general physical fitness, rock climbing is definitely a sport that can be a part of your exercise routine. It will help you look better, but you won’t be as nearly as “buffed” compared to those who focus most of their routine on weightlifting.

But whatever you chose to do, consult with a professional and bear in mind that proper nutrition and diet are half the work.

Next: Can Anyone Learn Parkour? →