How Do You Stop a BMX Bike Without Brakes? 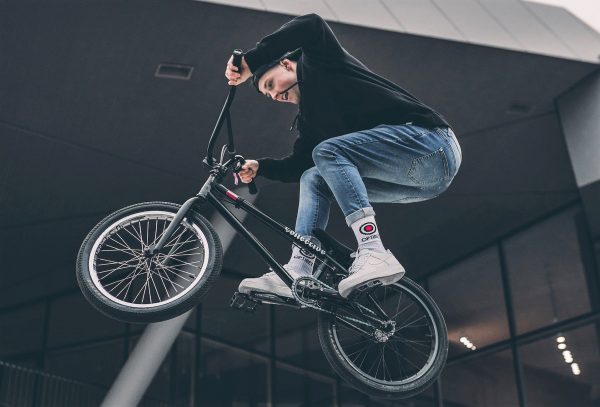 If you have ridden BMX and mountain bikes for years, you may notice an illogical sensation. The amount of BMX bike riders that swing their bikes without brakes is just huge.

Riding without a brake on a BMX has become a kind of trend over the years. It has moved away from being salvation to a crisis and more into the idea of individuals showing they can ride well while maintaining their speed correctly without the need for stopping power.

Riding without brakes can assist you sometimes. For instance, barspin and tailwhip stunts where the bars need to turn 360 degrees around each other. On the flip side having a brake line in the way will restrict the number of times you can do this without resetting it.

More often than not, today, people will take off their brakes to learn to maintain their bikes. Riding a BMX bike with no brakes could get you into jeopardy with the law. All bikes have to be marketed with no less than one brake.

Why Are Some BMX Bikes Without Brakes?

One of the reasons why most BMX bikes do not have brakes is that these bikes are not for racing. BMX drivers usually don’t race, they just do tricks. Since they are not driving fast, it is completely normal that they do not need brakes. The other reason they remove the brakes is to perform tricks, like barspins.

Tip: If you are wondering if it is too late to learn BMX, stop now! Go get your new BMX bike and start doing tricks as soon as you can!

Are BMX Bikes Supposed to Have Brakes?

Most BMX bike shops sell bikes with brakes and only a few without them. Mostly the BMX riders themselves take the brakes off immediately after buying them. But there is also a significant difference between BMX riders.

There are even those who ride their BMX bikes with two brakes. Most people still drive with one brake or no brakes at all. The last ones are experienced drivers whose focus is on performing as many tricks as possible.

Fact: Did you know that mountain biking can help running? This is an interesting but truthful observation.

How Can BMX Bike With No Brakes Stop?

First, you should understand that there are two basic types of drivers:

Freestyle BMX drivers usually have brakeless bikes. They are slow in doing tricks and so they use their feet as their brake. Generally, they don’t even need brakes.

This method is dangerous, so it is mostly practiced in skate parks. It is the only safe place without cars or traffic. That’s why they are mostly gathering places for BMX freestylers who drive without brakes.

Why Do Most BMX Bikes Have No Front Brakes?

Without a front brake, your bike will be lighter and easier to move. However, beginners usually insert a front brake on their BMX bike because it is easier for them to learn that way.

The explanation why BMX bikes don’t include front brakes is not that they’re incompetent or lazy. It’s mainly because the structure of the bike makes them useless.

The big tires on these bicycles deliver an extra level of security for bikers. This is why they are so prevalent with newbies and children, by all means. So when you begin hitting ramps and doing stunts, just bear in mind your braking system!

How do Regular BMX Brakes Work?

There are a couple of extra sorts of brakes that are available for various types of bikes. The two most typical are rim brakes and disc brakes, both of which can be divided into further classes.

Disc brakes will generally be seen on mountain bikes where tough braking is a need. You can purchase automatic and hydraulic disc brakes for a mountain bicycle. Mechanical disc brakes look almost precisely the same as hydraulic brakes aside from the method the pads are pressed against the rim.

Like this, a mechanical wire is drawn through a pliable tube by the brake lever. Hydraulic brakes utilize fluid. So, when the lever is removed some brake fluid will push the pads to the disc.

Tip: If you love to skate and you are new to it, you should buy skate wheels for a beginner. These are the most suitable if you are just starting out.

The rim brakes are rather apparent. They are those brakes you will usually see on kids’ bikes, more affordable bikes, or BMX bikes.

They twist over the rim of the bike’s tire and maintain rubber pads in position a few millimeters from each side of the edge. Rim brakes often arrive in either V-Brakes or U-Brakes and there’s just a small distinction.

Rim brakes slow the bike down by forcing the pads strongly against the rim. They use friction to slow down the wheel. Also, rim brakes are excellent for their poundage, cost, and clarity. Yet, you can quickly run into some little issues when employing them. They don’t get on nicely with water due to their slick nature.

Rim brakes can get blocked much easier from being near the debris-filled floor, and if your wheel is bent even negligibly, as most BMX wheels are, braking becomes more complex and much less efficient.

Tip: Did you know that there is quite a distinction between skateboarding and biking helmets? 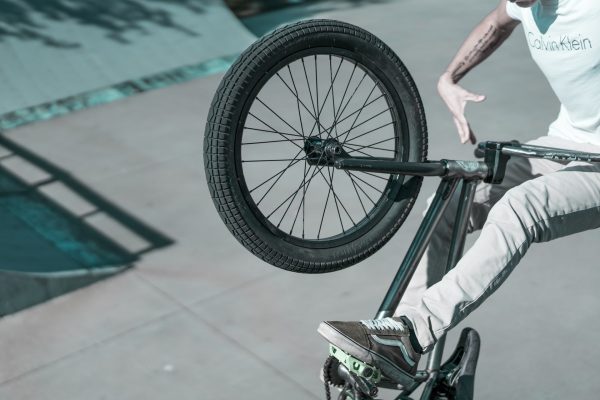 How do BMX Detanglers Work?

A single brake cord reaches out of the lever on the bars. On standard bicycles, this cord will stay the same all the way to the brake caliper. Yet, when utilizing a detangler, the cord will promptly split into two.

These cords are then routed to the two opposing flanks of the steerer tube. Each rear of the inner cable wire will then have a cord stop. These are simply spheroidal bits of metal on the end of the cable that lets the cables be slotted into grooves and not reach out of place.

The detangler is the circular pieces of metal that are linked together and turned around each other. They are bound to the headtube beneath the stem.

The cord stops noted above are slotted into the tiny metal slits on the overlying side of the detangler. So when the brake lever is dragged, the group is drawn upwards pulling the bottom area with it. That way, the cables are connected to the underpart in the same way.

The cords are then routed down to the back brake and integrated back into one at some point along this travel. Technically you could say the cord doesn’t need to be divided before going through the gyro. Yet, it is done as the best approach as it pulls the gyro rings equally on either side.

Remove or Install your BMX Brake

As there are numerous sorts of BMX brakes, we will go through the method of installing a back U-Brake to a BMX. Begin by checking your frame. You ought to inspect that you have the proper brake mounts for the kind of brake you are fitting.
Usually, you won’t run into any issues, but some bicycles do not arrive with fixed brake mounts. So, it’s a fine idea to inspect it. The following step is to connect your calipers to the frame. Hold your wheel on your bicycle, or you’ll stumble to get it back on after installation.
Make sure you have the accurate caliper side and only slide it onto the pre-greased brake mountings on either side of the wheel. If you own dust coverings, you will need to add these over the top of the arm springs. These bolts should be compressed now but not fully as there needs to be a bit of motion in the arms when braking.
Note: Did you know that because of its spectacular landscape, New Zealand is home to many extreme sports?

The following step is to align your brake cushions to the rim. If they aren’t already equipped with the brake arms, do that now. This is very precise and just involves compressing a bolt.
Before pulling, force both sides of the brake caliper onto the wheel rim and align the pads, so they track the curvature of the rim while being in the center of the surface.
Draw the pad bolts before removing the arms, and you’ll have entirely aligned brake pads. You can now go about installing the cord hanger and control system. The standard setup for a U-Brake is to have a short length of brake wire that goes from one arm, around the seat tube and connects to the other brake arm.
This wire is then tied around the cable hanger, which is on the back of the brake wire that runs the length of the bike down from the lever. The hanger that is bound to this wire pulls the looped brake cable, which lifts the arms jointly, forcing the pads onto the rim.
← Prev: How Do You Adjust the Angle on a BMX Seat? Next: What Side of the River Do You Kayak in the UK? → 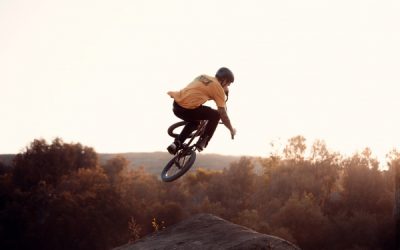 How Do You Adjust the Angle on a BMX Seat?

If you're pretty new to the world of BMX rides (and it's never too late to learn BMX), there's a chance that you're not familiar with some of the basics. Therefore, we can assume that you're still not sure how exactly you adjust the angle on a BMX seat. Needless to...