How Do Rock Climbers Get the Rope to the Top 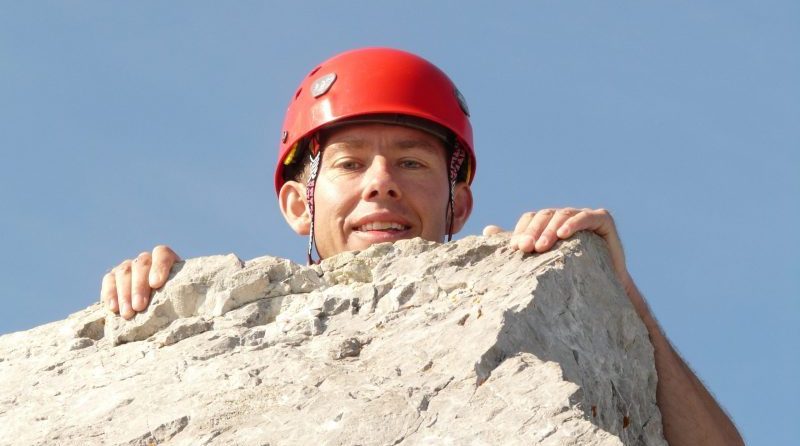 Rock climbing is inherently dangerous. Thus the security of harnesses, ropes, anchors, and belaying. But even with all the equipment, a slip in concentration can be dangerous to oneself and others.

If you’re new to rock-climbing you may be wondering what it takes to get the rope to the top.

It’s about moving upwards and using carabiners to clip the rope. They clip it to either pre-placed bolts in the rock with metal loops or to “trad gear” they insert into the rock as they climb. Once they reach a good stopping point or climb the full length of the rope, they’re making a robust anchor they attach themselves to.

It sounds easy, but is it, really? Read this article to learn more about rock climbing.

Climbing is a great sport and a great full-body and aerobic workout for anyone. Climbing at great heights, on the other hand, is not for the faint of heart. Even seeing someone hanging from a rockface and reaching to get their safety rope in place can make some people nauseous. And when you hold onto a rock at 50 feet above the ground, your safety rope is what makes the difference between descending safely and possibly fatal injury. So how does it work? How do climbers secure themselves and make sure they are safe when they climb at such altitudes?

The harness is a belt that the safety rope attaches to. It is the same as what professionals use for work at heights. Modern harnesses consist of rope or nylon webbing tied around the waist and loops for the legs. Simpler models, without the loops or padding, are not as safe and comfortable.

Only designated rope is safe for climbing. The climbing rope is dynamic, meaning it is slightly stretchy. Dynamic rope absorbs some of the force when coming to a stop abruptly after a fall. The force of an inadequate, static rope arrest a fall could injure a climber or break the equipment. Climbers must avoid any inadequate equipment, including the rope. Apart from lacking flexibility, it isn’t certified for stress and degrades quickly under friction.

When another person secures the climber, the climber is on belay. Owing to the distribution of forces along the anchoring points, the belayer can easily hold the climber’s weight without much force. A belayer far lighter than the climber should be secured to the ground to avert being pulled upwards if the climber falls.

Belaying covers a broad system designed to control the possible fall of a climber. The system includes belaying devices – there are several. The belayer, who remains on the ground controlling the rope operates the assisted braking device, such as the long lasting GriGri or one of many similar products. A climber can fully self-secure, as well, but climbing and operating a safety device requires high skill and much experience.

How does belaying work?

A climber ties one end of the rope to the safety harness. Figure 8 is the go-to knot. It’s easy to learn and safe. The rope then goes through protection that is on the rockface, permanently bolted or attached then removed for a climb. So, the rope runs from the climber’s harness through the protection on the rock and back down to the belayer. The belayer also wears a harness with the braking device attached.

The belayer uses the device to increase or decrease friction with the rope running through it. When the device is fully open, the rope passes through freely. Fully closed, the system totally arrests the rope. In between, it slides with more or less friction. That allows the climber to pull it while climbing higher. The belayer has the task of picking up the slack and feed the rope through the braking device so the climber can continue.

There are two main types of belaying: lead and top rope. They differ in how the rope is secured.

Getting to the Top

In top rope, one end of the rope runs from the climber’s harness, through a single anchor at the top of the route, and back to the belayer. This is the safest and most frequent kind of belaying. It is common in indoor climbing, but also amid environmental concerns because it requires fewer anchoring bolts. It’s also the best method to use when the climber is inexperienced since it is safer. Along with that, it’s less physically demanding and less stressful.

But how does the rope get to the top? When climbing outdoors, someone needs to thread the rope through a securing device at the top before and remove it after the climbing session. Sometimes climbers leave the rope behind to save time when they return, but that can be dangerous. Leaving the rope exposed to the sun and the rain will degrade it, so it may become unsafe for climbing. On some routes, the top is accessible on foot and then threading the rope and dropping the ends is easy. When that isn’t possible, the lead method remains the only way.

Lead is the more advanced climbing and securing method. A climber needs to be certified to lead the climb. In leading, the climber pulls the rope to the anchor at the top. During the ascent, the climber self-secures, alone or with a belayer, by attaching a different rope to the rock. Instead, it is connected directly from the lead climber to the belayer. 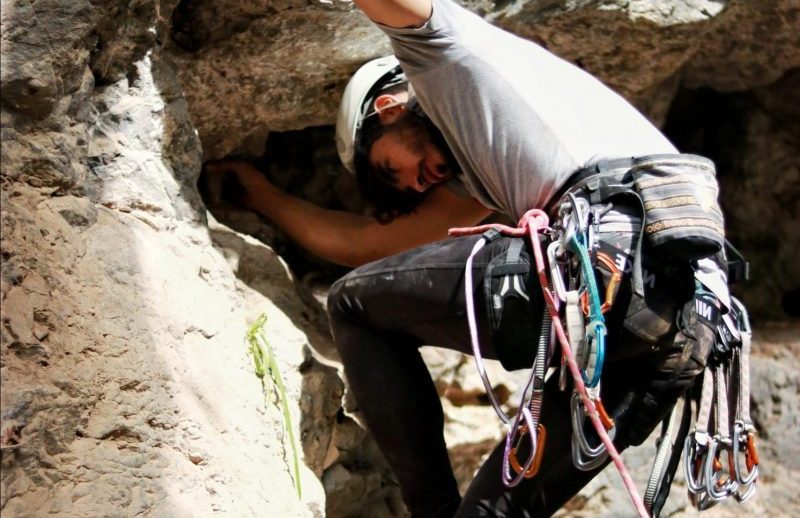 A quickdraw is two carabiners connected to a piece of strong, semi-rigid fabric. One of the carabiners goes to the bolted anchor, the other one on the rope. The leading climber must carry a quickdraw for every anchor on the route.

After clicking the quickdraw onto the anchor and the rope onto the other carabiner, the climber continues to the next anchor bolted to the rock. In case of a slip, the climber will fall past the last secured point and until the rope and the belayer arrest his fall below it. A fall from three feet above the last anchor means a flight of six feet, three below it.

At the top, the lead climber attaches a quickdraw to the top anchor and treads the other rope through. With both ends of that rope at the bottom, the climbing route can be top-roped.

The climber can then descend, uncoupling the lead rope while passing the anchors. At the end of the climbing session, a lead climber needs to go up again and unhook the top quickdraw.

When a climber leads, the belayer must watch the angle at which the rope will pull in case of a fall. The belayer must stand near the wall when securing to reduce the momentum.

Since the rope is close to the wall and the belayer’s side of the rope is anchored low, the sudden pull could pluck the bolts from the wall, one by one. In the worst case, with the momentum of the fall growing, all bolts could fail. Even if the bolts are strong enough and stay in place, the force of the pull could sweep the belayer off their feet and pull them to the wall.

For a seasoned climber, laying ropes for safe climbing, especially on a familiar route, may seem like a routine. That in itself is a lurking threat. Setting up the ropes and securing other climbers requires care and concentration from the start to the end of the session.

If you’re a climber, going outdoors to climb a cliff may be a dream come true. But if you do it, make sure you have someone experienced with you and listen to them. Don’t climb too often and put yourself and others in danger. Even if you are experienced, act as carefully as if it was your first climb. Don’t try to lead a climb without proper training and mastery of safety measures. Top rope climbing is much safer for a beginner. It will allow a full focus on the climb itself. Reaching the top will be just as rewarding.

← Prev: Can You Dye Snowboarding Pants Next: Does Biking Help Hiking →