How do Rock Climbers Secure Themselves? 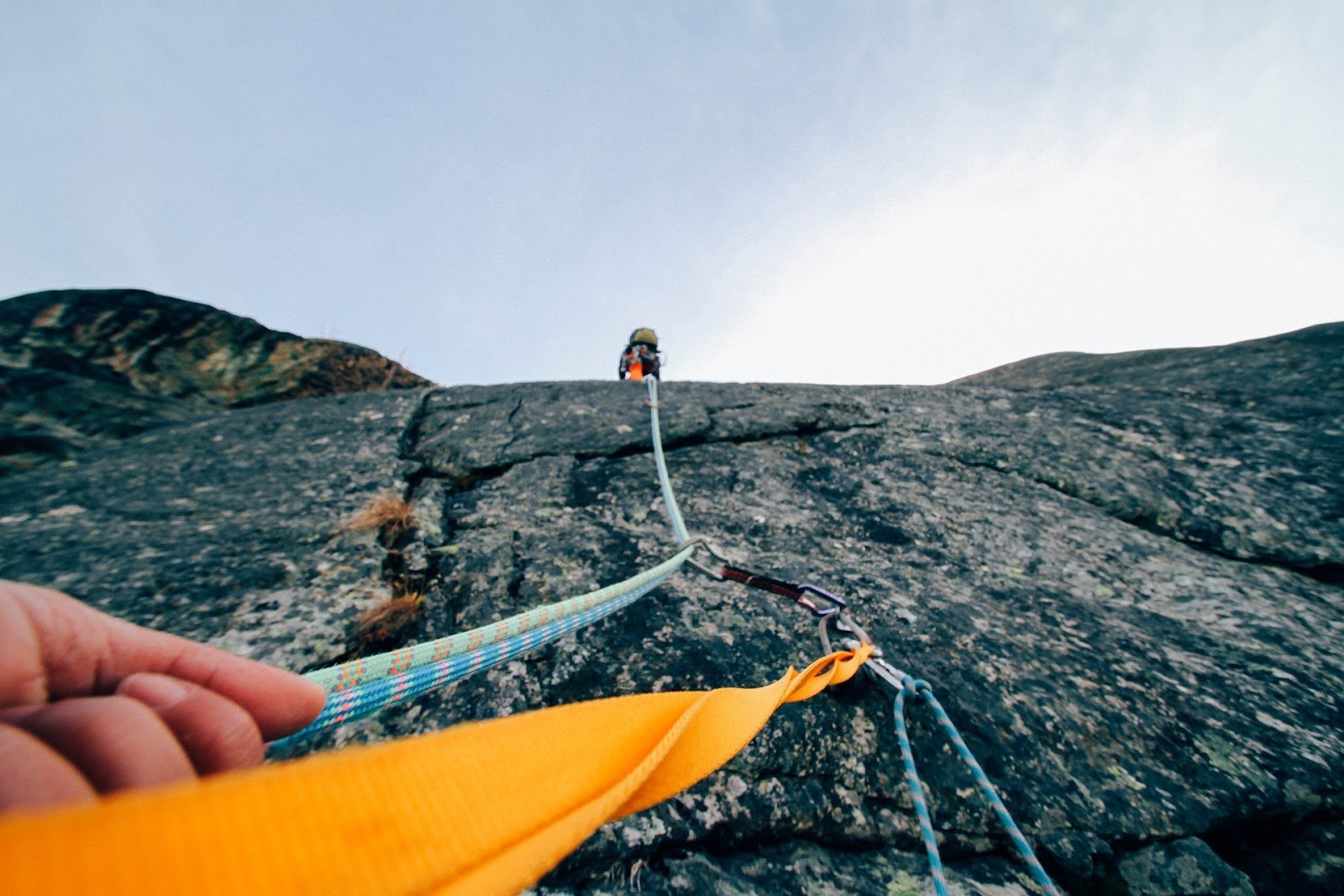 Rock climbing never was, and it never will be an individual sport. Your security, and by that your success to climb, always depend on your securing climber. If you trust your belay partner entirely, their expertise, and capability to react in unpredictable situations, you will be able to devote yourself to reaching the goal in front of you (or rather above).

It is hard to present a unified answer on how do rock climbers secure themselves. It is a combination of equipment, terrain, experience, and most importantly, teamwork. In rock climbing, the partner in charge of security always has to think about his actions, predict the partners’ movement, monitor the gear, and stay focused during the entire process.

From a rookie perspective, keeping an eye on everything, along with the theory on how to properly handle your gadgets can seem too complicated, but the fear of losing a climber is the hardest sensation to cope with when climbing over massive boulders.

Ever considered rock climbing? Before you start that slippery slope, you need to learn about the basics and how safely perform it. It is a process of experience, team trust, and knowledge of gear handling and maintenance.

Security Climbing Gadgets and How to Use Them

For starters, you need to understand the concept of the ‘climbing system’. It is made out of climbers who tie themselves on the central strap by its belt and a safety knot of the climbing rope that goes through the anchorage, with top-rope climbing. On the other hand, guidance climbing includes another partner in charge of our safety. Their job is to lead the rope through the insurance strap with a carabinier fastened to the central strap of their belt.

The next important segment is learning about the equipment and understanding the basic physics of climbing. When a climber falls, the stored energy redistributes when the fall is broken. The elements used for redistribution are the belt and safety device of the partner, the rope, and the knits (or rock bolts during top climbing) and bolts you are still secured to.

The ensuring device is a mechanical part of the equipment that allows easier control over the energy released during any fall, to the climber in charge of security. It is really important to learn about different securing equipment, the appropriate usage, advantages and flaws, possibilities and limitations, and, finally, understanding the basic principles of their functioning.

All types of gadgets used for securing work on the principle of frictions and pressure to absorb the energy that gets released during a broken fall, and make a ‘brake’ effect. The categories among all securing equipment are based on manual and assisted brake systems.

Types of Climbing Systems Rock Climbers Use to Secure Themselves

During climbing, there are several ways and systems for securing. According to the insurance type system and kind of advancements, there are two climbing systems:

In addition to these two systems, there are other types of climbing. It is important to say that top-rope or leading systems are used for covering high gravitational miles, as well as with fast climbing.

There are also climbing systems for low trajectories, that go up to 6m, and without security, but with a soft surface below, or with the following climber whose purpose is to prevent or minimize the fall impact of the free climber. This type of climbing is also known as bouldering and is often presented as a form for climb short terrains.

Cross climbing systems imply going over long and wide boulders only 3 m of height. This type of climbing is usually used for training. During this training, the climber has the perception of space (orienting left and right) and gaining strength, condition, and capabilities of transferring the body from one balanced position to another.

Low climbing systems require a secure climber, but only in the function of a monitor assistant, a person who will watch the climbers every move and be there in the event of falling, to hold the head or torso of the climber. This person is known as ‘the spotter’, and his assignment is to spot mistakes and/or assist. In addition to gravitational climbing systems, there are faster ones, where the training goal is to get to the top as fast as possible.

This is technically a knot, not a mechanical securing device. However, in certain situations, for example, if the climber uses his securing gadget during a multi-pitch climb, it can be used for securing. The Leader Anchor is locked by a carabinier.

Figure 8 can be used as an insurance device. It consists of two openings, a bigger and a smaller. The inactive segment goes out of the gadget, locking it while the partner in charge of security holds the rope on his hip.

The main advantage of this figure is the reduced friction, as well as the firm rope twisting, enabling the security partner to use more force when breaking a fall.

This type of gear is the first securing mechanism developed during the 70s’. It is made out of a metal plate with an opening through which you take a bent rope, similar to modern gadgets for ensuring. The pulled-through rope is then clasped with a karabiner for the main strat on the securing climbers’ safety belt. These plates can have holes of different widths 9-11mm.

There are plates with holes for a single rope, as well as plates with openings for a double rope. The inactive part of the rope ‘exits’ the gadget and is controlled by the belay to reduce the angle of braking.

It is used in sport and traditional rock climbing. It has a tubular or rectangular shape and two rope openings. During belaying, the bent rope is taken through one hole, and together with the loop of the devices are clasped with a karabiner onto the central belaying strap.

Its advantages are that it is compact, lightweight, and can use ropes of different widths. On the other hand, the basic flaw is the inability to use a multi-pitch.

These are tubules that have an additional ring on one end, and a smaller one on the other. These gadgets can be used as standard tubular for a belay in rock climbing, and as auto-locks. In that case, you put a carabiner in the larger opening, over which we directly place the anchorage. The smaller ring has the role of alleviating block during the climbers’ descent.

The advantage of these gadgets are also compactness and a wider spectrum of usage, but they are not as good when performing the descent in guide mode, or when using wider ropes.

These belay gadgets have a built-in mechanism that helps break the fall of a climber. It is important to note that there are not securing gadgets that allow automated operation. In most cases, climbers use one of these two passive locks to secure themselves:

These are more advanced from a technology standpoint, where the brake is achieved by tightening the rope between two surfaces within the gadget. They are only opened to insert the rope and have leverage that releases the brake. The most known example of this type is the GriGri. 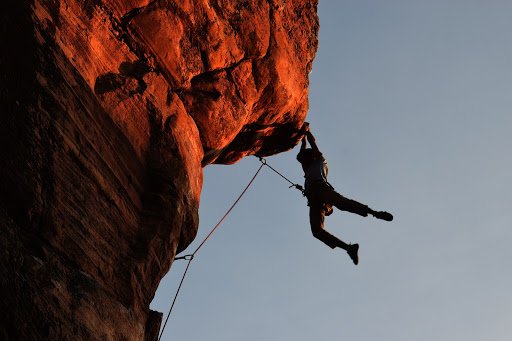 Behavior and Communication Will Save Your Life When Rock Climbing

Trust between the belay partner and lead climber is really important. Before beginning with the climb it is important to check every piece of the equipment.

For example, with top-rope climbing the factor of falling (the ratio of the length of the fall and the active length of the rope) is significantly shorter than with lead climbing. Even though the belayer must be focused on the climber, he needs to monitor the terrain and gear before clasping the rope into the first set. After that, a general rule is that the belayer stands closer to the rock, but this can vary depending on the terrain and some other uncontrollable factors.

Adequate and clear communication between climbers is key during the entire process. The climber in charge of security of the lead climber needs to know when and how much rope to provide to his partner, and to be prepared to react at the right time if there is a chance of fall. Most of the securing gadgets increase the impact force during the absorption of the fall, which is why it is key to react at the right time.

All of this can be confusing and complicated for beginners. The fear of dropping the climber will lead to a mistake. This is why it is very important to emphasize that you are a rookie, explain the extent of your experience, and share uncertainties.

In this sport, the team is as fragile as its weakest link, which cannot be in charge of safety or leading. Regular training and experience are the only way to progress and lose any insecurities, but doubting and being prepared is the difference between life and death with this sport.

← Prev: Can Anyone Learn Parkour? Next: Can Dogs Bungee Jump With You? →