Why Are Rock Climbers So Ripped? 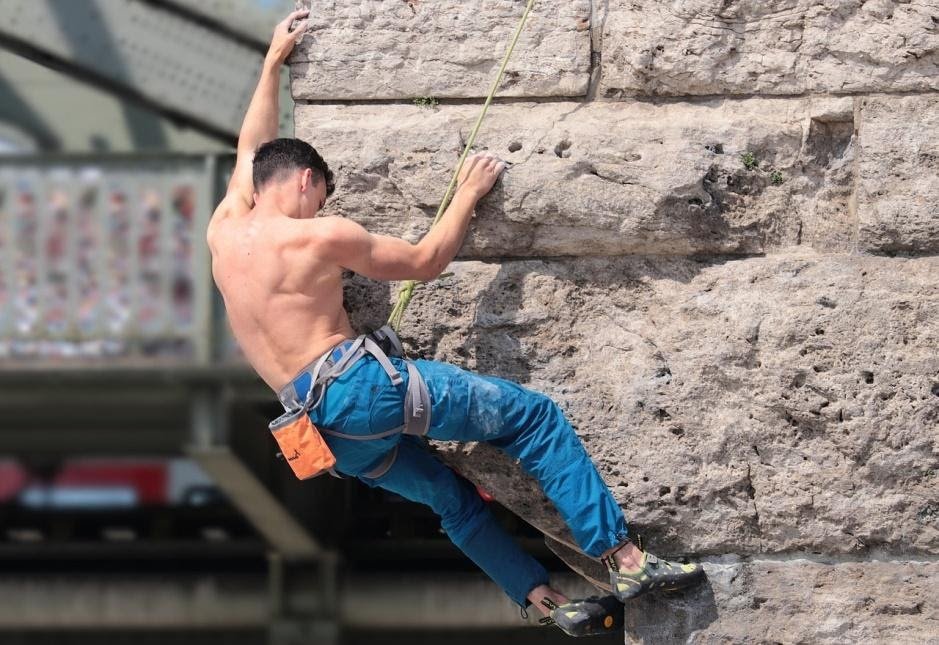 Heading out to become a rock climber is far from an easy task, even if your plan is to do it as a casual activity, performed only occasionally. After all, it’s not only hard work, in the sense of being a demanding physical activity, but also due to the very nature of this sport and the dangers that it comes with.

If we’re talking purely about the very intensity of this sport, it doesn’t come as a surprise that all active advanced rock climbers are, as you’d say, ripped.

But, why do rock climbers actually look so ripped?

Rock climbing engages a huge portion of muscles in your body and in a very unique way. As a result, we see an average rock climber’s awesome physique. However, you should bear in mind that the looks themselves are not the goal of rock climbing, but rather the product of hard work that these athletes put into achieving their desired goals and results.

So, what is exactly behind this look?  Well, that’s exactly what we’re going to tackle here.

What makes these hard-working athletes’ physiques so aesthetically pleasing?

As you’d assume, rock climbing leads to a rock-hard body. The sport itself includes a lot of specific movements that, eventually, help an individual get that desired look. Climbing includes different kinds of movements that include gripping, grappling, pulling, twisting, and pushing in many different shapes and forms. The activity, in itself, is pretty much a full-body workout.

One of the main muscle groups impacted here is core muscles. These include:

Additionally, most of the important muscle groups in the body are engaged. However, since rock climbing mostly consists of pulling movements of the upper part of the body, as well as hanging, there are muscles that aren’t as engaged. This is the case with chest (pectoral) muscles.

But not to get too nerdy about all of the details, the results can be seen on pretty much any photograph of a professional rock climber. A very lean figure with clearly pronounced muscle fibers.

And, above all, we can notice a fairly low percentage of body fat that makes it all visible. You can basically learn about anatomy just by looking at a rock climber!

But It’s Not Just the Rock Climbing Itself…

However, rock climbing on its own isn’t sufficient for this kind of ripped physique. There are two important types of exercise regimens that can help them achieve this, aside from the climbing itself, that is. The first one is strength training, usually a combination of calisthenics and the good old weight lifting. And the second one is the standard cardio, usually running.

But with this said, rock climbing can be used as an additional activity that can help you not only get in shape but also improve your appearance as well. Combining it with different workout regimes can help you get there, which is something that we’ll tackle here as well.

Different Kinds of “Ripped”: What Does Being “Ripped” Actually Mean?

It doesn’t take more than a glance to realize that rock climbers don’t exactly look the same as weightlifters or bodybuilders, who are usually associated with the now-popular word “ripped.” However, the aesthetic aspect is clearly visible among those who practice rock climbing, be it conventional climbing or bouldering.

In this particular sense, rock climbers look much leaner compared to regular weightlifters. Instead of packing a lot of muscle mass, rock climbers’ limbs usually seem a bit elongated and stretched. This is usually due to the very nature of the sport, which includes a lot of pulling movements and hanging.

Just like any sport, rock climbing also has its specific targeted muscle groups. We could put these into three categories: 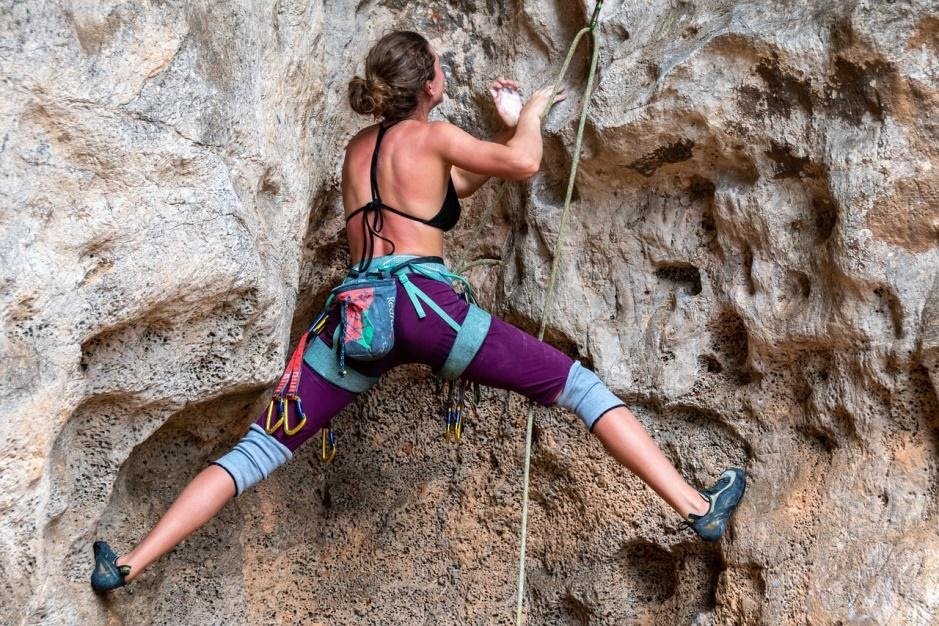 The forearms are one of the primary muscles. More precisely, finger flexor muscles of the forearm. What’s interesting is that they do a vast majority of work, despite not packing much mass. Their main purpose is to hold a climber’s weight for extended periods of time, all while their fingers are doing some pretty uncomfortable grip positions. Flexor pollicis longus, Flexor digitorum profundus, and Flexor digitorum superficialis are doing most of the work here.

Then we also have Latissimus dorsi and the large round muscle, also known as Musculus teres major. These two muscles are doing the heavy lifting, just like you’d have with a regular chin-up or a pull-up. The large round muscle is especially engaged at the very beginning of this movement. But once again, these muscles shouldn’t pack a lot of mass but rather need to do the job right. In fact, them having too much mass may be counterproductive in terms of flexibility and mobility.

Secondary muscles are the so-called “synergic stabilizing muscles”. These include the biceps, back shoulder, back, muscles of the rotator cuff, abdominal muscles, as well as calves. Biceps are not there to hold the weight, but rather just pull the body from the hanging position to another position.

Back muscles, as well as shoulder and rotator cuff muscles, also play a huge role in any pull-up movements. Their main purpose is to assist latissimus and help stabilize the scapula, all while pulling the upper arm towards the body.

Abdominal muscles, along with all the other core muscles, help climbers retain their stability. They keep the body tension in check and are almost always engaged. And the steeper things get, the more they’re engaged.

As far as calves go, they won’t be the decisive muscle group in terms of performance. However, they provide support on the other side of the climber’s body. After all, a climber’s toes are sometimes locked into some pretty uncomfortable positions, all while having to hold the body’s entire weight.

But it’s not just about what muscle groups are engaged, but also how they’re engaged. For instance, rock climbing includes a lot of positions that are rather uncomfortable, with climbers having to stay like this for relatively long periods. This particular type of effort significantly improves their physique, ultimately giving them that “ripped” and lean look.

It’s an Intensive Cardio as Well

An activity that engages so many different muscle groups most certainly spends a lot of calories. Therefore, it’s one of the best methods for exercising your cardiovascular system at different intensities.

According to research conducted over the years, rock climbing can use up a lot of aerobic capacity. What’s more, bouldering can be extremely intense, with shorter runs done multiple times in a row. This kind of exercise can achieve similar results to some present-day intensive cardio routines, like CrossFit or other functional fitness regimens.

While working at different intensities, you can burn up a lot of calories through conventional rock climbing and bouldering. Classic rock climbing will have a similar effect to steady-state cardio, where 50% of the spent energy comes from one’s fat reserves, all used up over a longer time period.

Meanwhile, bouldering is like an intensive anaerobic exercise, with about 30% of the energy coming from fat reserves. However, although a lower percentage, bouldering can help you spend more energy in a given time period, thus ultimately spending more fat compared to a steadier type of exercising.

But combining these two types of rock climbing, we can clearly notice why rock climbers look the way they do. Whether a steadier or more intensive activity, both of them engage large muscle groups, all at the same time, thus spending a lot of energy from fat reserves over a given time period. 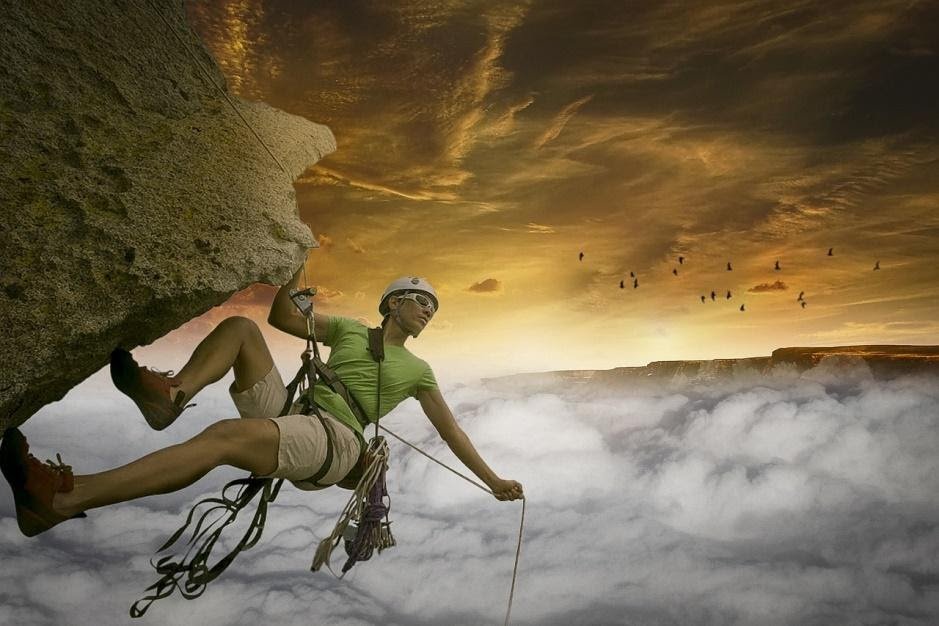 A Proper Diet Is the Key

But just like with any other sport or activity, you can’t exactly use your maximum potential without a proper diet. And this goes for both the actual results and overall looks. Climbing on its own is never enough and should always be complemented by proper nutrition.

When it comes to rock climbing, in all of its shapes and forms, having excessive “dead weight” in the form of fat reserves can be extremely harmful to one’s performance. Of course, there are always countless theories about what’s the proper way to eat depending on the exact sport.

However, the basic rules apply here as well. Don’t eat a lot of carbs, a fine portion of your food should include proteins and fibers, and you should keep a caloric deficit if you want to lose weight.

Can I Implement Rock Climbing Into My Exercise Regiment?

In case you like how rock climbers look, or the specific way of how they’re “ripped,” then you can definitely consider including some rock climbing in your weekly workout regiments. Rock climbing can generally be a great substitute for intensive cardio, all while engaging large muscle groups in your body.

However, you should know that climbers use weightlifting and calisthenics to enhance their performance. The activity on its own won’t exactly make you look “ripped” without additional strength training.

← Prev: Why do Parkour Wear Baggy Pants? Next: Is Rooftop Parkour Illegal? →