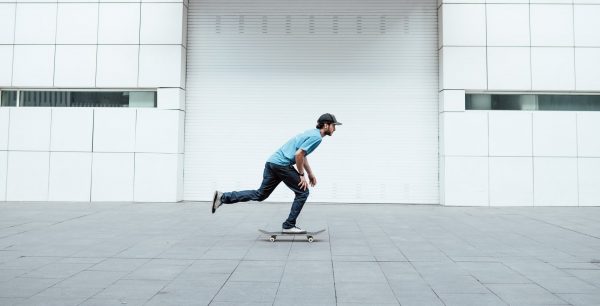 Many beginner skaters have trouble telling the difference between the front and back of a skateboard. This, in turn, often leads to the question: Does it matter which way you ride a skateboard? An honest answer to this question is somewhere between yes and no.

The way you ride a skateboard is largely a matter of personal preference. It doesn’t really matter if you choose to ride the tail of a skateboard over the nose, as long as you remember to switch from time to time. However, if you continually ride only one end, that particular end will wear out sooner, affecting your skateboard’s performance.

In this article, we will help you differentiate between the front and the back of a skateboard. We will teach you about different skateboard stances and tell you more about the different ways you can ride a skateboard. If you are just starting skateboarding, you may want to check out our blog to find out 10 reasons why skateboarding is good for you.

How to tell which way you ride a skateboard?

On the other hand, plenty of modern skateboards, especially shortboards, seem to have identical noses and tails. However, if you take a closer look, you will see that there are some differences between the front and back of the skateboard that might seem identical at first glance:

Does it matter which way you ride a skateboard?

Choosing to skate the nose of a skateboard over the tail is largely a matter of personal preference. However, if you tend to skate one end all the time, whether it’s a nose or a tail, chances are that particular end will wear out sooner. This one-directional ride can eventually affect your skateboard’s performance. Read our blog for more info on when you should replace a skateboard deck.

Skating the tail allows for a nice pop, which is important when doing tricks such as ollie. Skating tail first is often referred to as riding fakie. It’s an important trick when riding side to side in a half-pipe, as well as when performing tricks such as fakie ollie and rock to fakie. More on riding fakie a bit later. You can also check our blog on how to ride a skateboard backward.

What is the normal way to ride a skateboard?

There is no such thing as the normal way to ride a skateboard. All ways are normal, as long as they feel natural to you and as long as you are safe. Speaking of safety, try to make a habit of wearing a skateboard helmet.

There are two natural stances for skateboarding: regular and goofy. They refer to the most comfortable position that you should adopt as soon as you start out with skateboarding. Unless you are ambidextrous, you are likely to have a dominant foot. In the case of skateboarding, you will use your dominant foot to push a skateboard.

What is the regular way to ride a skateboard?

If you naturally have a regular skateboard stance, it means that your dominant foot is your right foot and you will push your skateboard with it. Your left foot will be forward on the deck, holding most of your body’s weight. This is the regular way to ride a skateboard.

What is the goofy way to ride a skateboard? 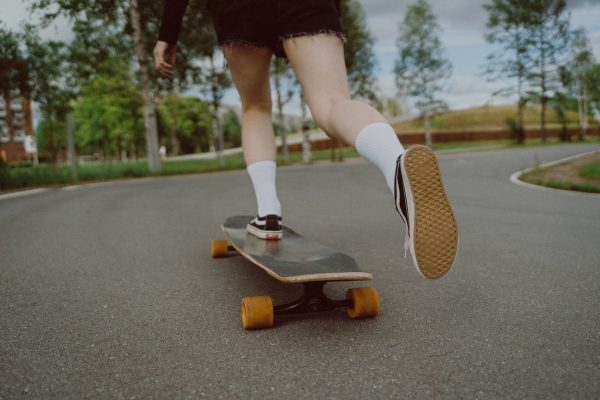 How do you skate nollie?

The term nollie is short for nose ollie. It refers to a stance that is very similar to your natural stance. However, there is one important difference when you skate nollie – both your feet are closer to the front, or the nose of a skateboard. This stance is slightly more difficult than your natural stance, but your body and feet will still face the same direction.

The nollie stance will help you with tricks that will require popping off of the nose of your skateboard. Such tricks are the nollie kickflip, the nollie heelflip and the nollie 180. The nollie tricks are all about the skateboard lifted into the air and a skater being able to catch it with their feet, before landing on the ground. Skating nollie requires a lot of patience and a lot of falling off a skateboard. Make sure you first learn how to properly fall off a skateboard.

These are some steps to help you learn how to perform a nollie:

How to ride fakie?

When you ride fakie, your feet are in your natural stance, whether it’s regular or goofy. However, you ride your board backward and your tail is facing the direction where you go. This technique is often used when you ride back down a ramp. Read or blog to learn how to ride up a ramp on a skateboard.

In this article, we talked about different ways how you can ride a skateboard at some length. We’ve also mentioned different skateboard stances. Skateboard is all about experimenting and there are no wrong or right ways of riding a board. If you would like to learn more about skateboarding, whether you are a beginner or a pro, check out these MasterClass skateboarding lessons taught by legendary skater Tony Hawk.

← Prev: Do You Have to Be Strong to Paddle Board? Next: Can You Use Climbing Rope for Canyoneering? →