Does Ziplining Make You Sore 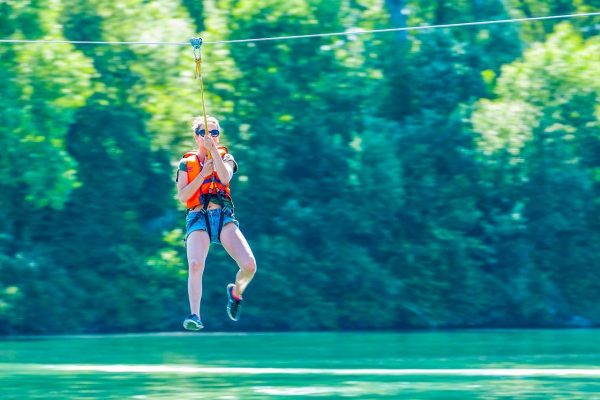 All the thrill-seeking adrenaline junkies these days are in luck as there are plenty of sports and other activities to get pumped about. And one of the most common and widespread these days is the good old ziplining. Sure, it may not be like bungee jumping, skydiving, jet-skiing, or anything that extreme, but it’s still one of the simplest and most engaging ways to get excited and just have a fun time.

But one of the questions that might arise from the whole topic of ziplining is whether the activity can make you feel sore in any way possible. Well, the question might not be the simplest one to answer.

Generally speaking, there’s hardly a chance that ziplining will make you sore. Those who practice it in any shape or form usually don’t experience any particular discomfort, at least when there’s the standard-setting ziplining involved with all the regular safety precautions and proper equipment handling involved.

But let’s go a bit deeper into this topic and see whether there are some cases when ziplining does actually make people sore.

What Is Ziplining and How It Came to Be?

Ziplining, or also known as “zip lining,” “zip-lining,” “aerial runway,” or “zip wire,” is essentially a form of a pulley attacket to a long suspended cable, which is itself mounted on any type of a slope. The main idea here is to have either a person or some type of cargo going from one point to another, using gravity as the main propellant. Essentially, the main goal of ziplining is faster, cheaper, and more effective transport of people and goods, most commonly in mountainous areas and countries.

The method can also be described as Tyrolean traverse, which is an old method of going through free space by exploiting gravity. It’s used when there are two high points, but without a cart hanging from it, or anything that serves as a cart. The method is believed to have been developed in the Tyrolean Alps back in the late 19th and the early 20th century.

But ziplining in itself was not conceived as a recreational pursuit, but rather a means of transportation. And even to this day, it should never be associated with just a leisure activity for tourists. If you want to go all the way back, activities similar to ziplining are as old as a couple of thousands of years or more. It is believed that it originates from the south and east Asia.

In fact, some parts of China, more specifically the Nujiang valley in Yunnan, used the method until 2015 before the building of bridges in the area. And even Europe had its similar zipline-like structures back in medieval times when ropes were used to create ropeways that would transport people and goods using gravity.

Development Into a Recreational Activity

However, as years went by, it eventually turned into an entertaining and recreational activity. This comes as no surprise at all since people noticed that it really does feel exciting. It was in the first half of the 18th century that we got the first documented use of this method for entertaining purposes.

But aside from some rare examples of its recreational use, it eventually developed into the kind of activity that we know today. Ziplining has become an almost mandatory activity in tourist centers all around the world.

These days, it’s become very common as a part of children’s playgrounds. Of course, these are small-sized rides designed to keep the speed at lower levels. There’s a small grip and it’s not that high from the ground in order to prevent any potential injuries.

Then there are the standard touristic ziplining spots, often referred to as the “adventure ziplining.” These longer rides are often used for accessing some remote areas. This way, you not only get there faster but also have a chance to enjoy the scenery and get some adrenaline pumping.

It’s Still Used as a Means of Transportation

Of course, as attractive as it may be for tourist activity, ziplining is still often used for transport. For instance, it’s still pretty much a thing in South America, most commonly for the transportation of harvested crops in more complex ziplining systems. The goods are transported over deeper valleys. This same kind of use is present in some parts of Asia as well, most notably in India’s Ladakh region.

But although it seems like an outdated way to transport anything, it’s actually becoming increasingly popular for this particular use in more recent years. Aerial ropeways, pretty much similar to classic ziplining as we know it today. And it’s actually not a surprise at all as this is not only cheaper but also a more environmentally friendly way to transport goods.

Does Ziplining Make You Sore?

Now, let’s get back to the regular ziplining, the kind that’s done as a recreational activity. The issue of soreness is not that common with ziplining. In fact, it’s rarely ever reported in any shape or form. However, it is not impossible to experience it, especially with any sort of improper practices applied in the process.

When ziplining, you should usually do it steadily and in a relaxed state. In most cases, speeds go up to 30 or even 40 miles per hour. But in some extreme cases, these can reach well over 100 miles per hour.

With this in mind, any kind of sudden movement or being tense while riding at really high speeds can eventually contribute to your muscles feeling sore. In case you’re really fond of ziplining but occasionally feel this kind of soreness, here are a few things that you can do:

Another thing that you can feel is sore skin, which can occur due to equipment properties. The harness may sometimes feel a bit weird on you. And, to some of those participating in ziplining, things might get just a little uncomfortable. This usually happens when the harness is too tight. But in almost all cases, there’s a high chance that you won’t experience any discomfort with the harness. This may happen if you’re strapped in uncomfortably or if the particular ziplining spot is using old or cheap equipment, which is not something you see every day.

Feeling Sore Due to Ziplining Is Pretty Rare

But in case you’re planning to try ziplining for the first time and worrying whether it will feel uncomfortable, this should be the least of your concerns. In fact, it happens so rarely that it’s not even mentioned as one of the common problems with it.

It’s Supposed to Be Comfortable

Ziplining is far from an extreme activity, even with higher speeds. Although moving over valleys and above treetops, it’s usually pretty straightforward and safe. With that said, ziplining is designed to be a pretty comfortable recreational activity. In fact, it’s quite often done as a group activity for entire families. 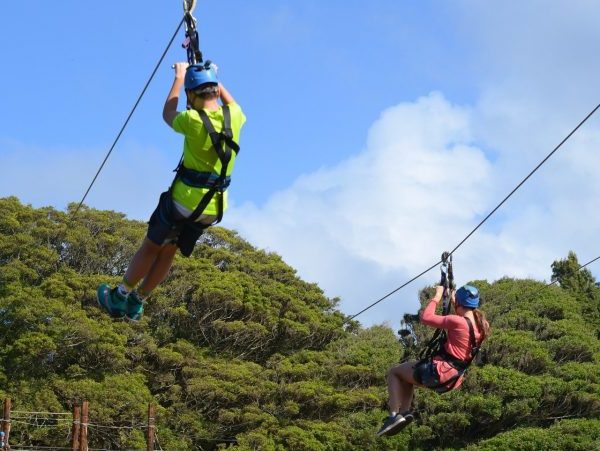 With this in mind, ziplining shouldn’t ever be uncomfortable in any way. Feeling sore muscles is not really that common, and that’s mostly due to not being completely relaxed while you’re doing it. It can also sometimes happen if you keep looking left or right for longer periods while riding at higher speeds. The chances for this can increase significantly when riding at higher speeds.

Again, you should just keep it all relaxed and enjoy the ride. This keeps any potential kind of soreness away, be it muscles or your skin.

Safety Is Always the Priority

Sure, it’s not an extreme sport, but there are several safety precautions to have in mind with ziplining. After all, you’re riding at a certain height and over weird terrains. So aside from the harness and a very secure connection with the rope, there are a few important pieces of equipment that a zipliner must wear. This also includes gloves and a helmet.

Over the years, the injuries have actually increased. However, this is mostly due to non-regulated zipline spots that aren’t conforming to any particular safety standards. Therefore, it’s of absolute importance that you find out whether this ziplining spot that you’re planning to go to is official or not. Proper equipment, proper safety standards, as well as highly trained staff should be the highest priority. It’s only then that you can enjoy the fun.

And with proper safety regulations and proper utilization of the equipment, the chance of feeling any discomfort is pretty much close to zero. If you’ve ever experienced any kind of soreness and if it has discouraged you from going ziplining again, don’t worry – it’s most likely not you but rather an improper ziplining spot. So go out there, check all the safety regulations and try it again!

← Prev: Why Do Mountaineers Carry Special Shoes Next: Is Ziplining Like a Roller Coaster → 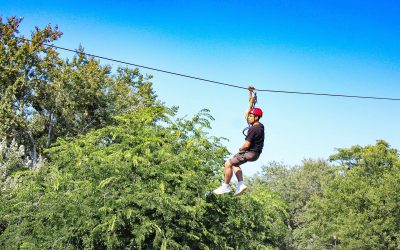 How Much Do You Have to Weigh to Zipline?

Zipline weight limit is specified by the designer or builder of that particular approach. Canaan zip line riders must weigh somewhere from 75 to 265 pounds per our designer or builder. Make sure to continually check with the outfitter you’re curious about before... 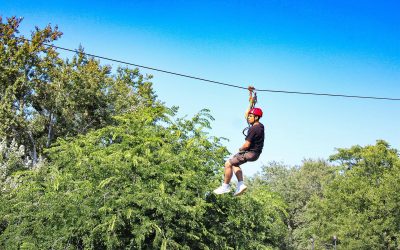 Can Ziplining Cause Vertigo?

There’s nothing similar to that first zip-line adventure. You get on that helmet and a harness, snip into the trolley and stand at the border of a scaffold. In some way, it’s a lot loftier from up there than it looked from the bottom. Yet after elevating the bravery,... 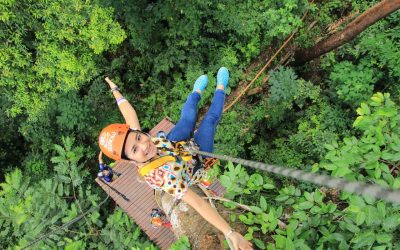 What to Wear When You Go Ziplining?

Going on a ziplining adventure anytime soon? Also, will that be your first time? If you've never ziplined before - you're in for a treat! Even the worst skeptics out there admit that ziplining is pretty darn exciting and fun! Since you're new to the sport, you might... 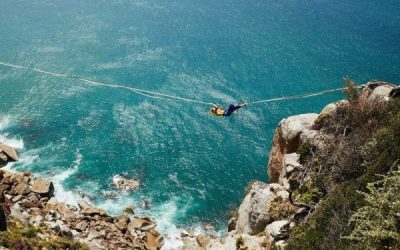 Is Zip Lining Bad for Your Back?

The demand for ziplining has increased rapidly over the last few years. There are more than 14,000 beginner ziplines in outdoor education schedules, camps, and backyards. The popularity of ziplining is surely on the rise. However, it is necessary to be mindful of the...