How many calories does snowboarding burn? 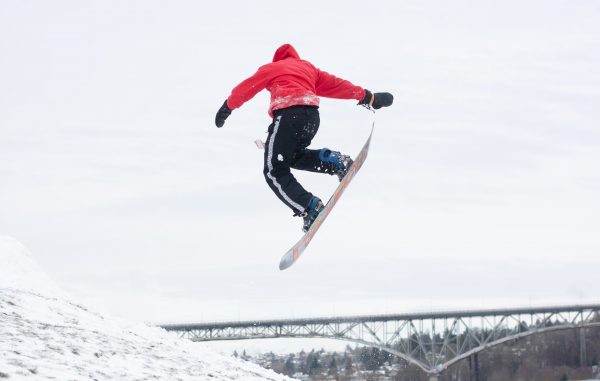 It’s safe to guess most people know that snowboarding isn’t something you’d call child’s play. Physically, it’s a very demanding sport. But, there are many rewards that this wonderful sport gives in return. Let’s phrase it like this: snowboarding’s a fantastic exercise that works wonders for our bodies and overall well-being.

Since you’re reading this text, there’s a good chance you might be wondering if snowboarding’s the right choice for you. In the text you’ll find below, we’ll show you why everyone should give snowboarding a try! Also, our main focus will be on answering the question in the title: how many calories does snowboarding burn?

Research results show that adults who weigh between 110 lb (50 kg) and 200 lb (90 kg) burn somewhere between 250 and 630 kcal per hour.  Beginners will most likely lose more calories since they’ll have to invest more effort and pick themselves up while frequently falling. Professional snowboarders burn about 350 kcal/hour during casual rides.

If that’s not enough for ya, keep on scrolling!

A sneak peek into the history of snowboarding

It all starts in present-day northern China, some 10.000 years ago (8000 BC), a moment in which we place the oldest skis we’ve dug up to this day. Okay, let’s fast-forward a bit. It’s 1965 and Sherman Poppen ties two skis together and creates a so-called snurfer. Really? Did it take us almost 10.000 years to come up with that one?

Now, let’s not jump to conclusions. The scenario with the tied skis might’ve happened before. But, Sherman Poppen’s story’s a bit different. He licensed the snurfer with Brunswick Corp. and helped them come up with a production technique. This lead to the mass distribution of snurfers around the country.

It’s estimated that more than one million snurfers were sold between 1965-75. We forgot to tell you something: as an early version of a snowboard, the snurfer came with a rope that was attached to the nose, and it didn’t look much like something you’d call a snowboard. One could say the snurfer resembles a single fat ski. Anyway, there are doubts that the snurfer was seen as anything but a children’s toy.

After Sherman Poppen, the next name that defined snowboarding history is Dimitrije Milovich, a surfer from the East Coast. In the early 1970s, he developed a brand new type of board. The model was based on a fresh version of surfboard called the short-board. The design included iconic steel edges. Milovich’s company called Winterstick is known as the first one to produce snowboards.

The year 1977 might be the most important one in the history of the snowboard. A 23-year old student called Jake Burton created the snowboard as we know it today. He added foot straps and fins for more stability and balance, while the board was planked and made of wood. Nowadays, Burton is the leader in the field of snowboard equipment, and many wintertime-lovers wear it with pride.

It’s interesting that during the 80s snowboarding was forbidden at most winter resorts. Boarders basically had to sneak in at night and try to avoid detection, just so they could ride without any hassle. At the same time, the first snowboarding competitions started garnering the attention of the media.

During the 90s snowboarding became the fastest-growing wintertime sport. Some research results suggest about 7 million people tried it during the decade. Of course, ski resorts had no alternative but to allow snowboarders to enjoy their rides, without feeling like they’re doing something that’s forbidden.

Nowadays, snowboarding is carefully nurturing its popularity and there’s no talk about whether the sport has lost its momentum or something. Are you wondering why that is so? We’ll show you in the next section of the article where we’ll talk about the topic you’re probably more interested in than snowboarding history: how many calories does snowboarding burn? Bear with us! 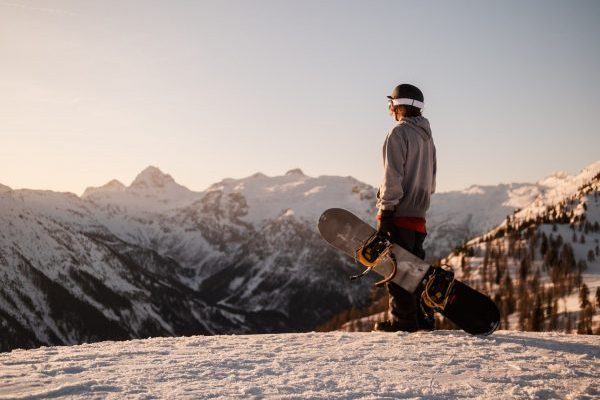 How many calories does snowboarding burn?

Anyone who’s ever tried any winter sport is already well-introduced to the fact they’re a great workout. Okay, so we all know snowboarding’s a great exercise, but most of us aren’t familiar with the numbers that speak in the name of its effect on our bodies. That’s about to change pretty darn soon. But first, let’s see what’s the term we’re dealing with here.

We’ve all heard of this term. Pop culture is obsessed with counting calories. Whether it’s the movies or music – it doesn’t matter, we’ve quite surrounded by the talk about calories. How many calories does a single Coca-Cola bottle have? Or: that’s way too many calories, dear. Not the best examples of calorie talk one could find, but you get the gist of it.

Anyway, calories seem like that kind of term everyone has a notion of what’s it about, but can’t really define it. So, let’s give a standard, encyclopedia-wise definition of calories. First things first, calories are energy units. We can distinguish two types of calories:

Today, we’ll be talking about the latter.

Alright, so how many large calories (kcal) does snowboarding burn?

Research has proven that adults who weigh between 110 (50 kg) and 200 (90 kg) pounds can burn somewhere between 250 and 630 kcal/hour. Also, researchers have noticed that skiing and snowboarding demand almost equal amounts of effort. Although learning to snowboard may prove more beneficial. Why? Well, you’ll probably fall a lot, so you’ll get an upper-body workout on the side by picking yourself up off the ground/snow every once in a while.

Also, there’s a catch here. The better you get at snowboarding, the less energy you’ll have to use to make it from the top of the hill down to the bottom. In other words: you’ll burn fewer calories once you get pretty good at it. For instance, your average professional snowboarder only burns about 350 kcal/hour while they casually ride on the slopes. That’s why most of them have to introduce an alternative exercise to their workout. Running or swimming are among those exercises that complete the circle.

Alright, that’s about it about the relationship between snowboarding and calories. But, don’t go anywhere as we’ve prepared a bonus round.

Is rust on snowboard edges a bad thing?

If you’ve noticed rust on your snowboard’s edge, it’s not that big of a deal. Although, it’s preferable you get rid of it (the rust, not the board). Use a gummy or diamond stone. Some folks even use sandpaper. Anyway, it’s important you clean the rust since a corroded edge can slightly mess up your performance.

For a more in-depth answer, feel free to click here.

Nope, snowboard wax won’t go bad. It’s made out of steady components that will not allow that to happen. Of course, you’ll need to make sure it’s kept in a closed container, stored in a dry and cool space. A quick tip on the side: don’t forget to wax your snowboard once you clean the rust as we’ve shown you above.

Wondering if there’s more to this topic? Go ahead and pay a visit to this page.

Well, scratches on a snowboard can turn out to be an issue, especially if they’re pretty deep. Your board can lose its flexibility, and you’ll have a hard time maneuvering it in the snow. For scratch-prevention measures, follow this link.

How many calories does snowboarding burn? – a recap

Okay, so we’re nearing the end of this article. The timing’s right to a bit of a recap. So, how many calories does snowboarding actually burns?

Alright, that’s about it as far as this article goes. If you’re looking for more snowboarding tips, you’ll find ’em here.

← Prev: What Is Easier to Learn: Wind Surfing or Kite Surfing? Next: Freestyle vs. Freeride Snowboarding - What’s the Difference? →